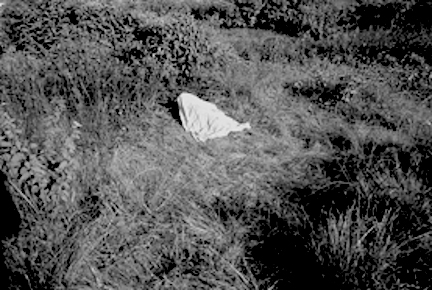 I got my High School diploma from a half-seminary, half rich-kids-in-trouble boarding school, run by Benedictine monks who liked fist fights as much as Gregorian Chants. I went to college. One semester I signed up for 19 credit hours. Then I proceeded straight to the airport, flew to San Francisco, drank, smoked, dropped, made love not war, and sold oregano in sandwich bags to tourists for air fare home. I took my finals and got a 3.4 GPA without ever attending an actual class. Got into law school without a degree because I killed the entrance exam. Lost interest. Quit after six weeks.

I’m a really smart guy, but I always lose interest.

Speaking of losing interest, this isn’t how these kind of things are supposed to start. There’s supposed to be a body, isn’t there? The preference is for a female body. This is the spot for what they call in the movies, the money shot. Hey, I’m a slave to convention. So that’s how I’ll start.

There was a dead girl sprawled across a little hump of matted down prairie grass up on a hill overlooking the city of Tirawa.

There’s no denying that one of the girl’s tits was exposed. Maybe her pubic area was visible because of the way her plain black skirt had been pushed up around her waist. I really don’t want to think about that. See, I knew her when she was alive and beautiful. There’s nothing beautiful about death in the real world. Bent back over that hump of ground she was ugly. Her skin wasn’t milky white, it was the color of a grub worm. I can’t see any prurient aspect to the scene so I won’t make any of that perverted stuff up.

When the teenage boy walked over to the bare-branched lilac bush that bent over the body, he didn’t expect anything except a good strong satisfying piss. He unzipped, tugged out his penis and peed. A natural thing for a boy to do. One thing all guys do when they piss outdoors is look all around them, scanning all quadrants. It’s primitive nature living on in our modern brains. See, that’s when the predators get us primates, when we’re drinking at the water hole or pausing to piss on the veldt. One second we’re shaking our dick, the next a saber tooth tiger is daintily supping on our intestines. So the kid looked around instinctively, and the first thing he saw was her bare foot glowing in the shadows of the lilac.

The kid froze. He pissed on his own shoe. He ran the waxy cold image through his brain. The pubescent nuerons fired back an interpretation. “Dead.” The concept popped up in his consciousness. “Dead” communicates well across a distance. He didn’t need to examine the body. He never touched her. His dick dripped. He stood there with a blank screen for a face. Trapped in a programming loop. “Dead… Dead… Dead…”   The smell of urine and the sight of death linked forever together in his pimpled psyche. He couldn’t breathe.

There was a sound behind him. The boy’s head snapped around and he came face-to-face with Jesus. A vision. A trick of November night, perspective, and his own primal fear floating beyond the edge of the ridge behind an old church. The Saviour was covered in blood and writhing on a copper clad crucifix bathed in moonlight.   Christ floated in the air. The boy’s testicles crawled up into his abdomen. He turned around again and the branches of the lilac bush moved just enough in the November breeze for him to get a glimpse of the body connected to the white foot. The cold, curdled, cream shade of bone ivory stopped his breath. Just before he ran he found enough air in his lungs to scream.

There was a dead girl on the Albino Farm.

When Officer Redlands got the call he’d only been on duty for an hour. Redlands was disappointed at first. He worked the night shift because that’s when the action happened. Chases, confrontations, combative assholes, evildoers, action, that’s what he needed. Adrenaline made his headaches almost go away. The motto he lived by: “Feeling tense? Punch a Perp.”

Don’t get me wrong. This isn’t true for all policemen. I hate it when idiots claim police brutality whenever they get a paper cut signing their confessions. Some of my best friends are cops. A few officers have arrested me so many times that’s it’s only natural — and practical — that we establish good relationships. If I get beat up? Well, most of the time I deserve it. Redlands, however, has a reputation down in Vaporville that strikes fear into all of us peace-loving criminals. He’s known to be devout.

Redlands drove through Vaporville and slowed at St. Philomena’s church. He looked up at the dark hill behind the church; a sharply cut bluff with a summit that stood even with the old stone steeple. He knew the way. Past the church, the street twists back and out onto the old river road. Tirawa’s city lights fade quickly in the shadow of the hill, and it was dark. He’d been up to the Albino Farm before, but he still needed his spotlight to find the turn-off. The “farm” was high on a sharp, wooded ridge that ran between the big river and my Vaporville neighborhood, up a twisting muddy road into a wooded area, through a clearing, and past some abandoned ramshackle houses where, by legend, the albinos once lived. Redlands had grown up in Tirawa so he knew the stories. He almost flashed his high beams to blind their pink little eyes. That was the customary way to insure safety when you took your girl up to the Albino Farm.

He turned the patrol car up a narrow path of tire ruts and drove a few hundred yards more up to a lookout. There’s a little empty gap there in the woods at the crest, room for three or four cars to park. And it’s only a few steps to the edge where the bluff falls away steeply. The view looks directly down on the rear of the old stone parish church. St. Philomena’s tall steeple pushes up from the mildewed roof of the sanctuary and looms, suspended out in space, even in height with the summit of the hill. On the pinnacle of the church’s tower there’s a huge cross with a particularly Mel Gibson-style Jesus. When the light is right, the gap from the cliff edge to the cross seems to shrink. Some kids on acid think they can make the jump. They can’t. Some kids think Jesus is smiling. He’s not.

Unfolding from the Taurus — Redlands was 6’5” — the officer proceeded to the hilltop. He had been a star offensive lineman at the Catholic Prep school, and though he was a bit trimmer now, he was still a load. His uniform was perfectly pressed. He was obsessive about the regs. It was too dark to see his eyes but, take it from me, they were a dull brown, and he didn’t blink as much as normal people do. I found all that out later. Redlands’ hair was razor neat and buzz cut clean. He loved the uniform; things seemed simple when he was wearing it.

After some twenty yards, he observed a patch of muddy dirt smelling of urine, and some twelve feet to his left and front, the bare foot and lower leg of an unknown female. Caucasian. He spoke into the mini-tape recorder his wife bought for him at Wal-Mart for Father’s Day even though they had no children.

“Victim is on her back. Appears deceased. Vulva is exposed. Skirt bunched up around her waist. One breast exposed, torn white blouse.” He placed two fingers on her neck, not gently. Her head rolled away from the pressure. Even by a big man’s measure, he wasn’t graceful or Alan Alda sensitive. “Victim is deceased, no obvious trauma. Time: zero thirteen hours, am returning to car.”

He pressed the button on his shoulder com-unit. “Baker 218…Baker 218.” Then he babbled some numbers, jargon, and shoptalk that added up to “Murder on the Albino Farm.”   I don’t know what any police codes or procedures are, except for that procedure that always ends up with me in cuffs on the way to the hoosegow. So far I’ve been luckier than Officer Redlands. He drives a cramped little Taurus. I always ride in the back of a nice roomy Crown Vic.

The call made, response received, Redlands opened the trunk and got out the Crime Scene Tape. He really liked Crime Scene Tape. String it around an area and regular people couldn’t cross it. It kind of created a little sanctuary; holy ground. He unwound the tape carefully. He didn’t want any tangles. Things should be neat. Then, as he waited for the detectives, he knelt down and started saying a rosary for the soul of the dearly departed. That’s the kind of guy he was.

And that’s why he had to die.